"Bubu" is the Pidgin word for grandparent. Here are a couple more pictures from Larry and Marcia's arrival:


Marmi and Papa brought some FUN and delicious gifts! This was a photo book made by our babysitter and photographer Naomi: 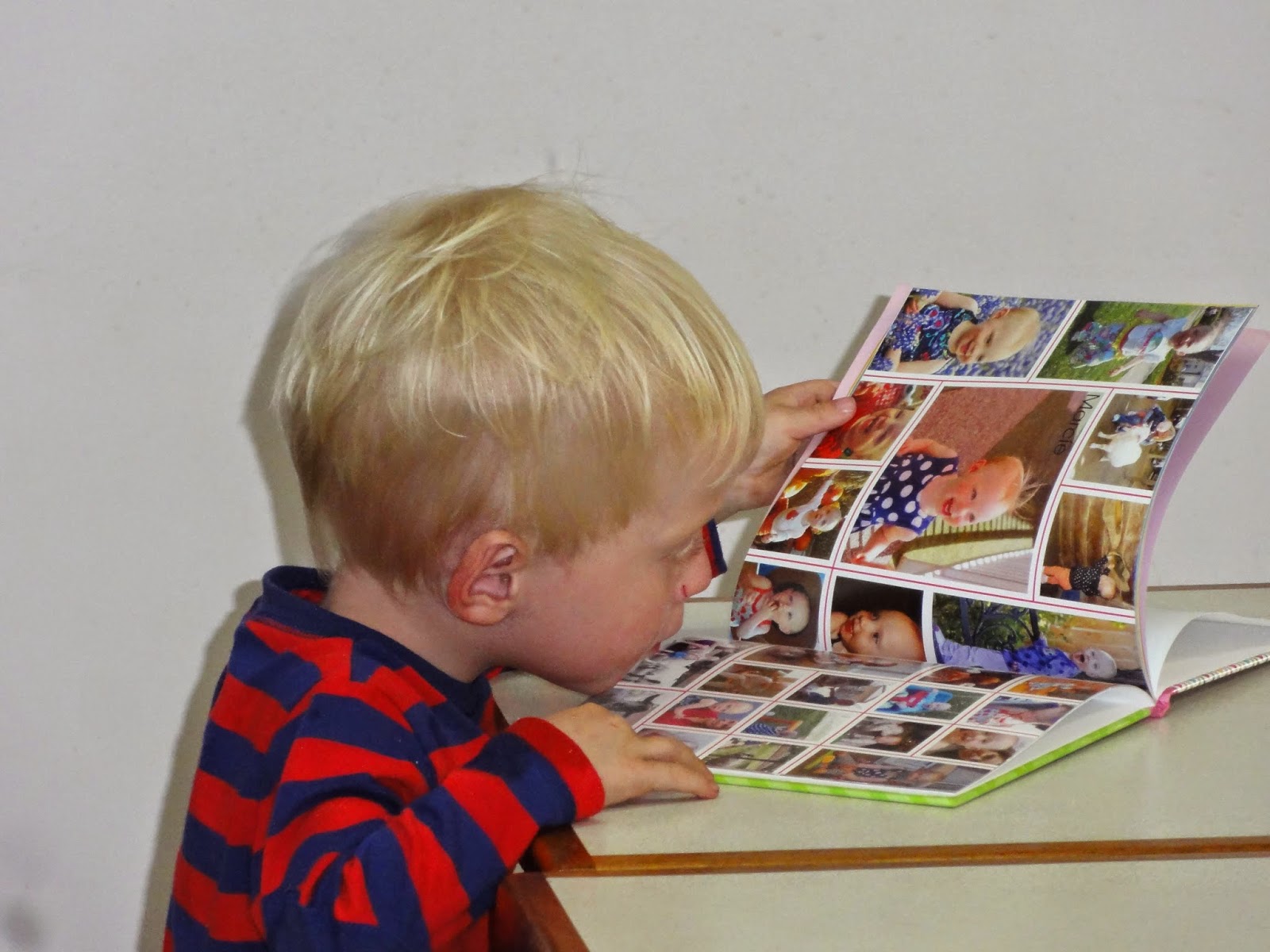 Adventures in the PNG bush

Here in Ukarumpa we live right up against the breathtakingly beautiful forests and mountains of PNG. Our cleaning lady and babysitter (her daughter) live in a village about 30 minutes from us, and yesterday I drove them home with the quints in tow as Gavin was still at work. The quints are such a hit out there, it's hilarious! Little and big kids along the road know our car and our kids, and they make all kinds of flower arrangements, leis, garlands, and even gather petals to throw on our hood. We come home with our dashboard and floor just covered with beautiful tropical flowers. It's so sweet!

The people of PNG think the quints and I are such a miracle. They can't imagine how a woman can carry five babies; I have to explain that they were born three months early and would have almost surely all died if born in PNG, and that Seth nearly did die! Many have asked if this is the first set of quints in the world. We explain it's really not that rare in the U.S. because of fertility medication [Aside: I was told there was a slight possibility I could conceive triplets, at most, so imagine the absolute SHOCK of quints!!! Statistically, I had only a 33% chance of conceiving at all!] The most they have heard of here in PNG is triplets. A couple of decades ago my cleaning lady actually had triplet girls born at 5 months, tinier even than Gracie. They were born dead. She went on to have many more thrivingly healthy children, thank God!

People in these villages and many others surrounding our mission center have prayed for our babies since we first announced I was pregnant with five. My cleaning lady, who is like family and has been since Isaac was younger than the quints, distributed photos all around the mountain after the kids were born, showing how God had answered the prayers of SO MANY. I was already well known up there because of having gone along with our clinic van on their monthly mother and child health outreach trips for several years. I have weighed most of the kids on that mountain at one time or another! It's fun to see them growing up, and it's especially fun to see the joy my kids give them and vice versa. The quints love the attention! They think Papua New Guineans are the best! :)

Posted by GavinCarrie at 2:20 AM No comments:

. . . nearly two years or more to put these adorable Gymboree outfits on our kids! Someone sent them to us (I hate to confess I don't remember who!) when the kids were still newborns, I think! Thanks again, Debbie, for taking pictures for me on Friday morning during play date!

Will and David love Mac the Truck from the movie Cars: 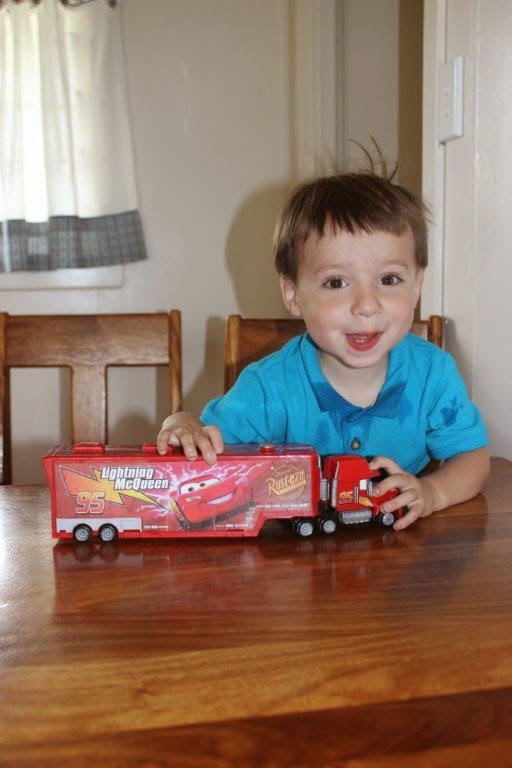 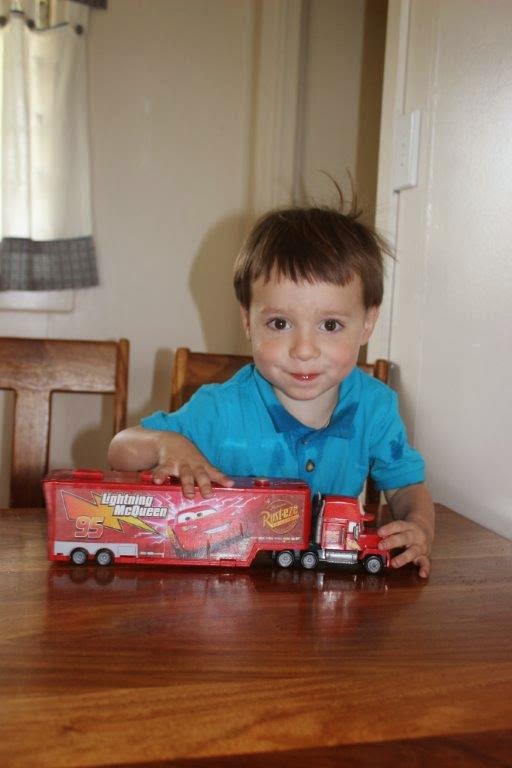 Posted by GavinCarrie at 1:40 AM No comments:

Marmi and Papa are here!

Gavin's parents made it safely and sanely here! The kids remembered them and went right to them! It's so fun to have grandparents right up the road, literally. Thanks for your prayers for their travels and adjustment. I'm sure they'd really appreciate continued prayers as they settle in. It can take a while, especially since the community here has changed greatly in the three years since they were last here. We love you, Marmi and Papa! 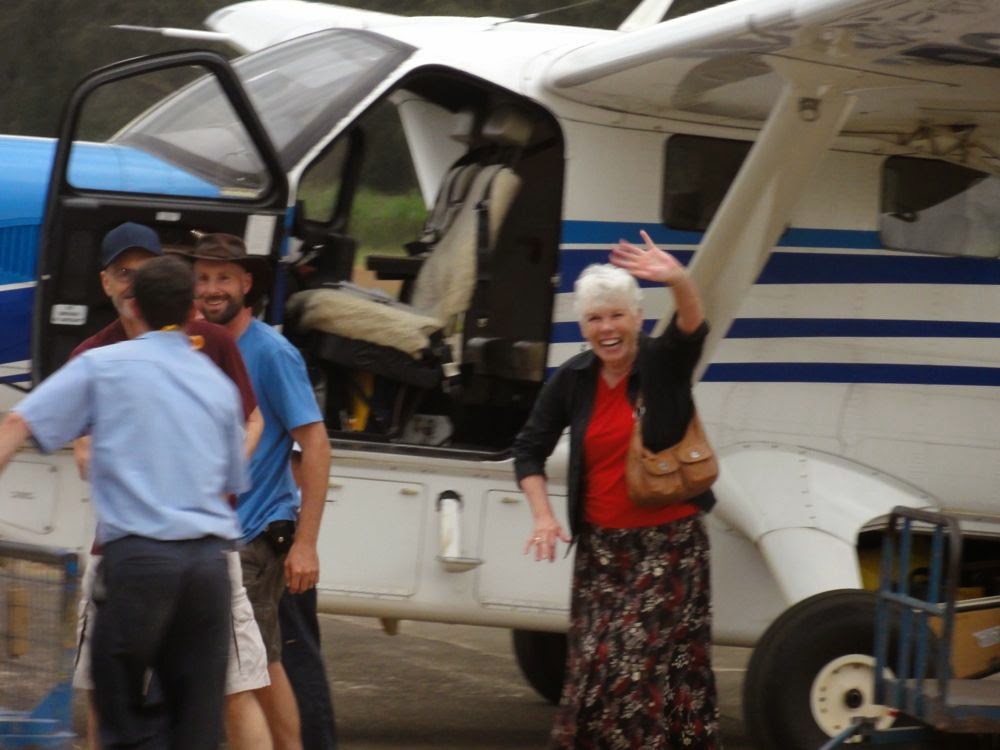 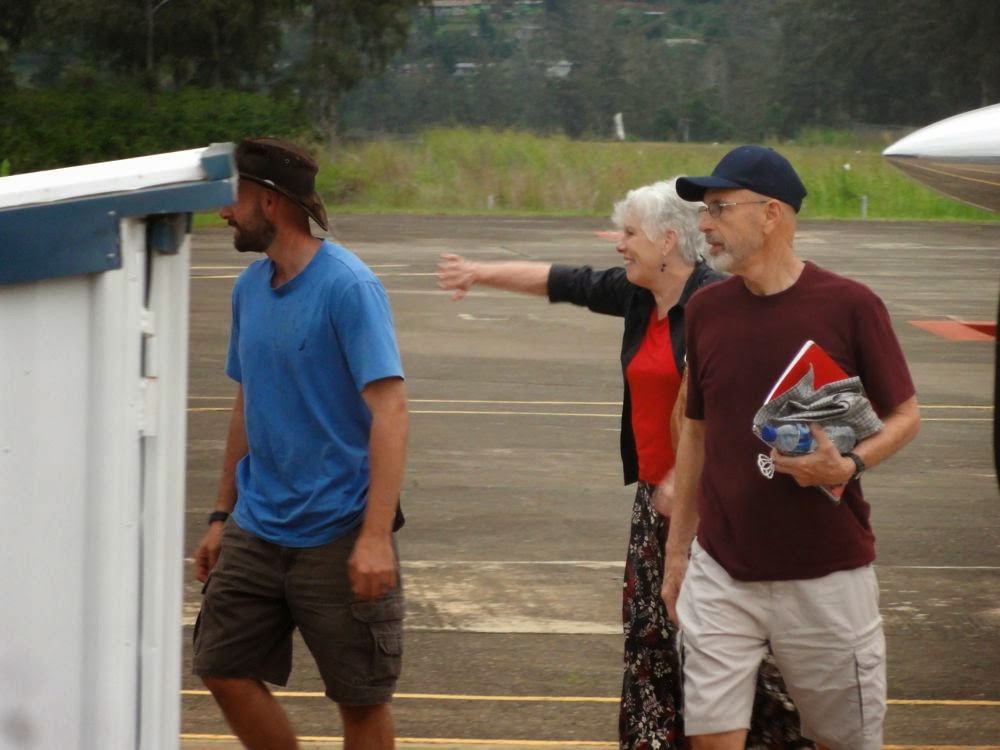 Posted by GavinCarrie at 1:36 AM 4 comments:

So, I decided I could do it finally: Make a meal from scratch (albeit a very simple one with very few dishes) and have a new couple and their kids over. It would be the FIRST time I cooked everything and had a whole family over. I was left with one kid, David, while Gavin took the others away so I could focus on getting ready. David was still proving a little bit needy, so I put a show on for him in Isaac's room, on Isaac's bed. He couldn't get into much trouble there, right?

This is what Gavin found when he got back: 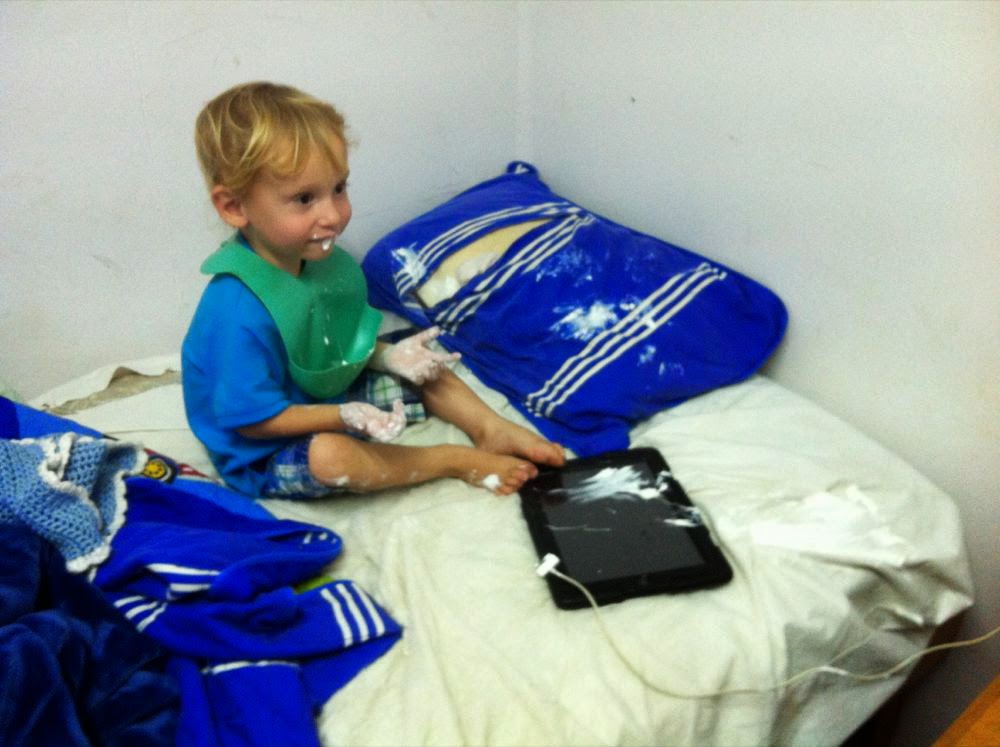 Oh my. David found the kids' toothpaste in Isaac's room (because Isaac left it there when brushing his teeth the night before). He managed to get toothpaste all over the tablet he was watching the show on, all over the bed, and all over himself. Thankfully, little to no toothpaste actually make it INTO his mouth, although he was clearly flirting with the idea. We caught him with it raised to his lips, and you can see the proof on his chin!

We laughed it off and cleaned it up later. We also had a great time with our company, even though the kids seemed to be in rare form like they were showing off how crazy they could get! It was fun nevertheless. The family has a great sense of humor and just watched, laughed, and helped out as needed. Their six-year-old son was obviously overwhelmed, however. :o]

Posted by GavinCarrie at 1:30 AM No comments: 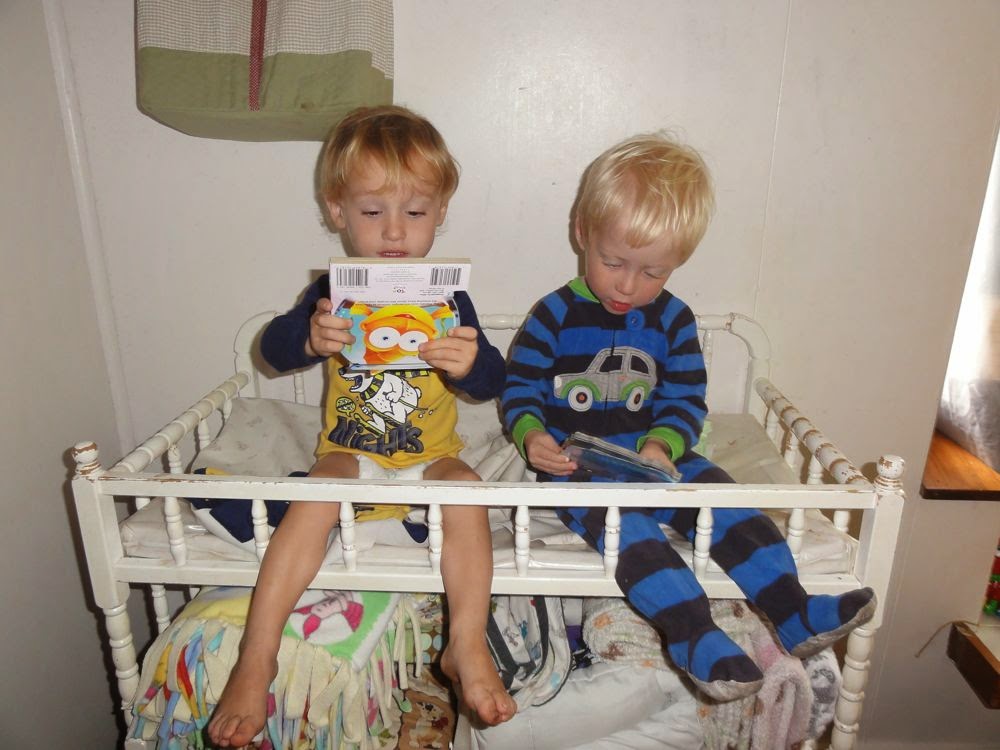 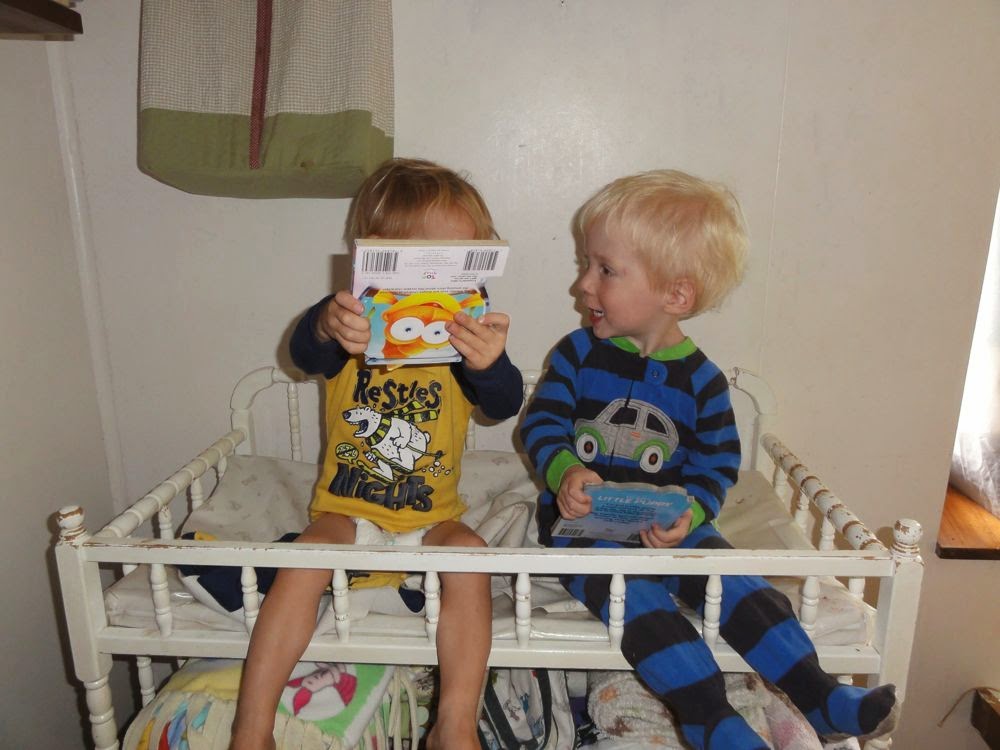 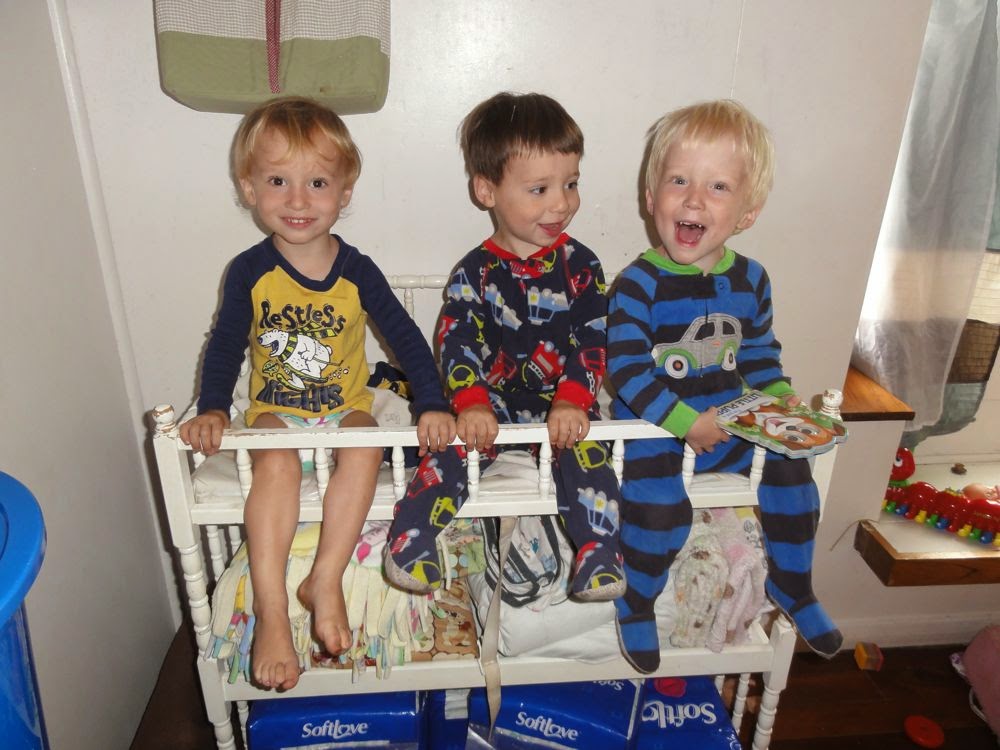 Posted by GavinCarrie at 1:21 AM 2 comments:

Boys and their books 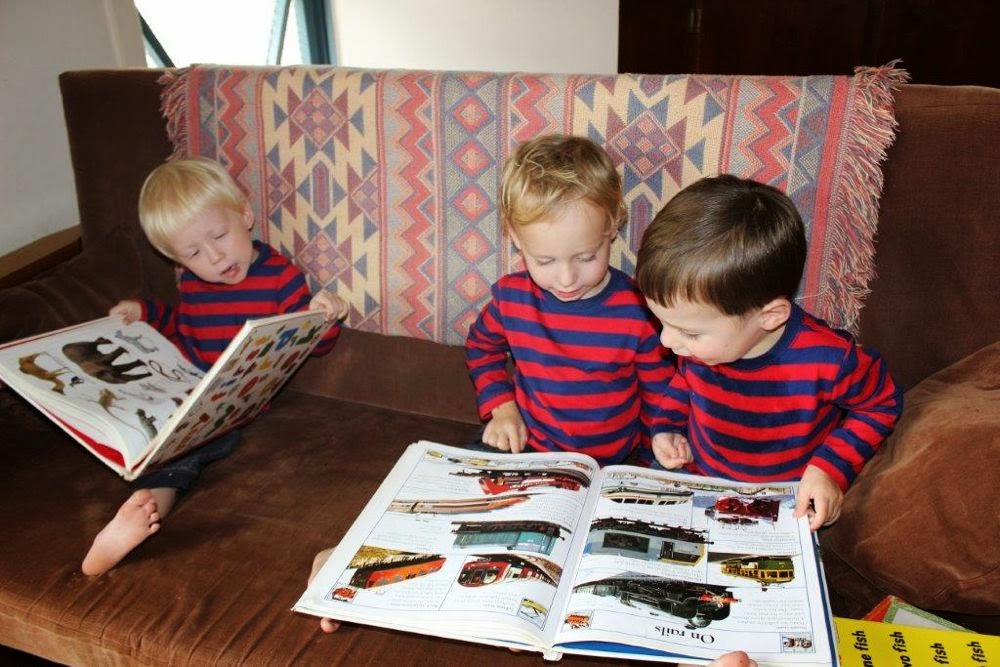 Posted by GavinCarrie at 1:14 AM No comments:


Uh-oh, what have we discovered upon arrival at our Christmas Even luncheon?? A very chocolatey, guilty Marcie who quietly sat in the back of the car and made this much mess in a span of literally two minutes! That pie became the quints'. We stripped off their pretty Christmas clothes and sat them around it in diapers and let them plow in. Thankfully we had three more of the exact same pie. 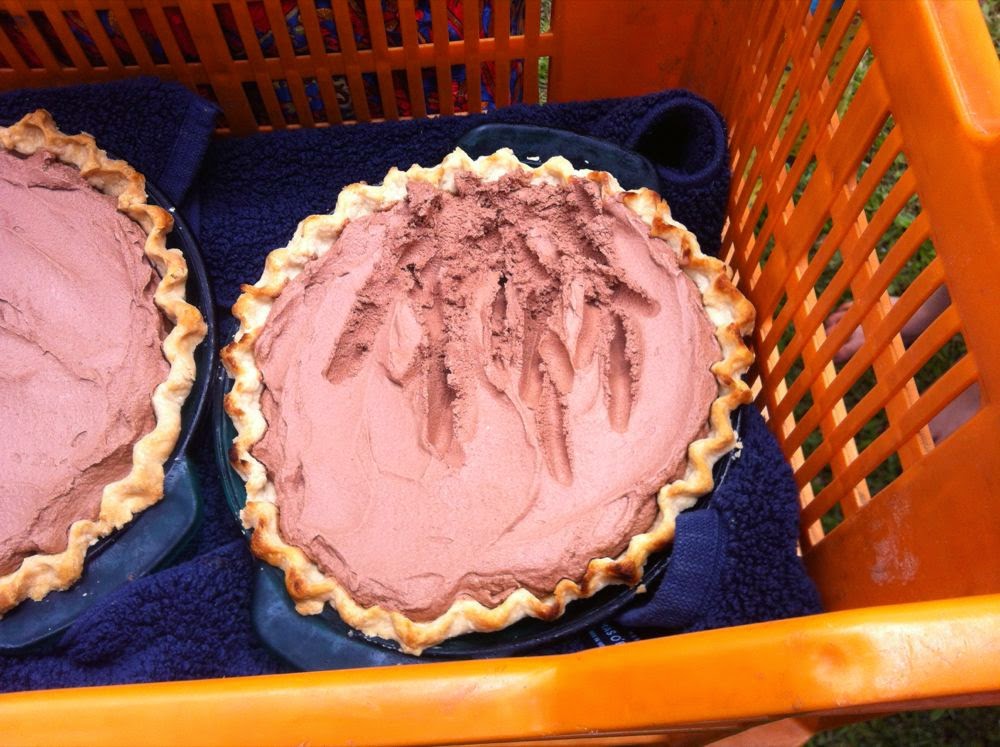 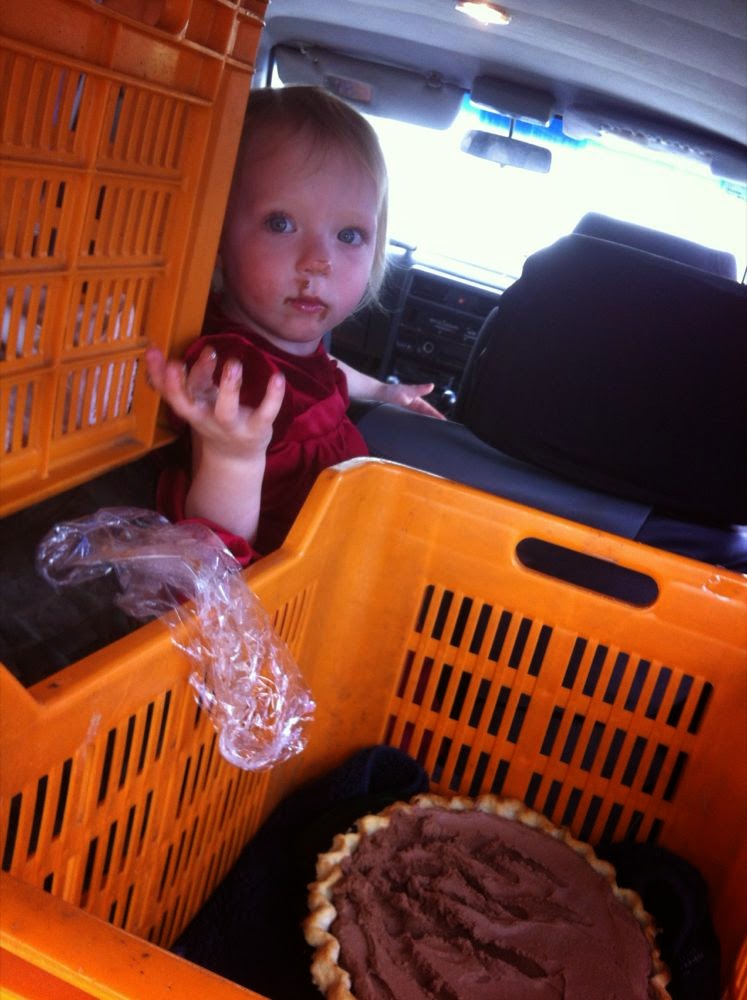 Posted by GavinCarrie at 1:10 AM No comments:

Playing in the pink tent

We have our Internet fully operational again and I have a few moments to finally catch up on some of the backlog of photos and mini stories of adventures. Note: I can't get our blog to format correctly but am not going to worry about it since I am not a real blogger - I just post pictures, prayer requests, funny stories, and updates as I can. :) Hope you can put up with our weird pages!

Taken by Debbie during their Friday play date way back before Thanksgiving (I somehow forgot to post these - how could I?? They are so cute!):

Posted by GavinCarrie at 1:02 AM 2 comments: