Matthew is out of the hospital!

We just heard that Matthew is out of the hospital and resting.  They are planning to return back to PNG on Friday, Lord-willing!  Thank you all for your prayers on behalf of the Crosland family!

If you want to know more about them, look up "The Croslands in PNG" on Facebook.

Posted by GavinCarrie at 11:46 PM No comments: 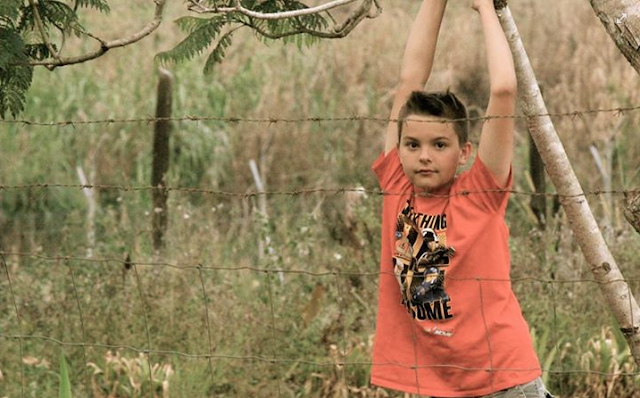 Psalm 27:13-14: "I believe I will see the goodness of the Lord in the land of the living. Wait on the Lord; be strong, and may your heart be stout; wait on the Lord."Please continue to lift Matthew up in prayer. I've not heard anything from them since 1:30 this morning (8 hrs. ago). I am desperate for news. He has been through so much already. Here is our boy in his natural habitat. - FB post by his mom
Posted by GavinCarrie at 7:21 PM No comments:

Praising God!!! Thank you for praying!!!

I just heard from Matt in Cairns. Matthew started to make a rapid recovery about an hour ago, and has regained much of his memory. The CT scan did not reveal any bleeding, Praise God. He was diagnosed with a severe concussion and will be observed overnight. We believe that he had an undiagnosed head injury after his last fall in May that caused this relatively small fall to result in major damage. Looking back I can see that there were signs, but his body was in such a mess it went overlooked. If things continue to improve he will be discharged tomorrow and will be home on Friday. I have no doubt that it was the prayers of thousands around the globe that has turned this nightmare around. Thank you, God. Thank you friends. Thank you prayer warriors. Matt will update when he gets a chance.

- again, from Matthew's mom (Matt is the dad). Matthew had a really bad fall in May, which is why in her previous post she said something about how much can one little boy handle. We love this family. They have three boys around Isaac's age, which was nice of them. :) Matthew is the closest in age, the oldest. Isaac was so sad and scared last night, he'll be thrilled to hear this good news when he wakes up! He'll also be thrilled to hear Matthew is coming back on Friday already, Lord willing! He kept asking (1) if he'd be okay, and (2) how soon he could come back. (They had a sleep-over "scheduled" for Thursday night - it's a two-week school break here.)

I've posted pictures in the past of the boys burying each other in our sandbox. :) I can't get ahold of Matthew's mom right now for permission to post a photo with identifying names; maybe later. I hope she's sleeping!

Love and unspeakable gratitude to our Great Physician and you all who prayed!,
Carrie
Posted by GavinCarrie at 5:35 PM No comments:

URGENT PRAYER REQUEST FOR ONE OF ISAAC'S BEST BUDS

***This is A CALL TO PRAYER***Matthew has just been medi-vacced to Cairns with a head injury with total short term memory loss and some long term memory loss as well. Matt has flown with him this time. They barely made it before last light. Please pray for a safe flight, wisdom for the doctors, me here home worried sick with the 6 other children, and for complete and total healing for Matthew. I am wondering how much one little boy can bear. We'll update when we can.

- this was written by the mom of the boy who was hurt in our backyard this afternoon. It was a total fluke, not from any even remotely dangerous game or crazy type of play. Isaac and I are particularly devastated, and we are all deeply concerned. PLEASE PRAY WITH US for Matthew's complete recovery!

Posted by GavinCarrie at 7:54 AM No comments:

These are the tractors out at Aviation, used for cutting the grass (I presume). Seth and Gracie obliged us with a few photo-ops. 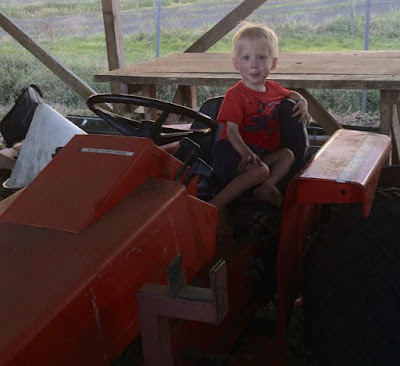 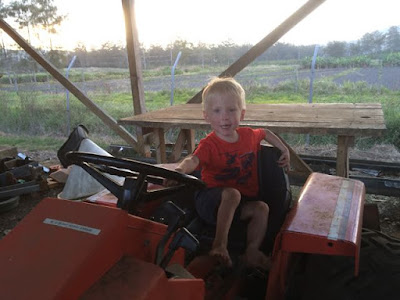 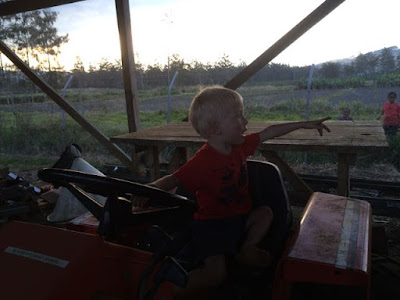 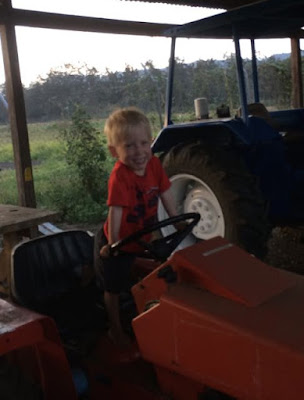 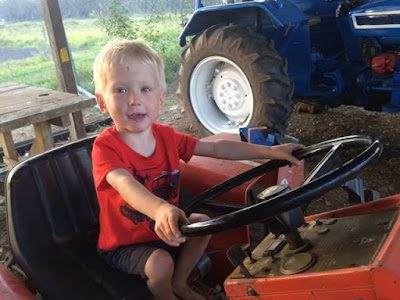 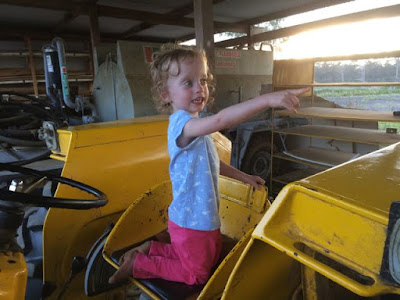 Posted by GavinCarrie at 5:59 PM No comments:

Seth came in crying brokenheartedly. I took him on my lap and asked him if he needed a snack or some chocolate milk (bear in mind this is the child we are supposed to be fattening up at every opportunity. Basically he drinks enriched Ovaltine.) He said he wanted the "choc-it milk" and waited patiently for me to get it for him. Meanwhile he struck up a little conversation:

"Mommy, are you alright?"

He finally gave up trying to find his owie and just went away happily drinking his milk.

And David JUST came inside, asking "How you going?" 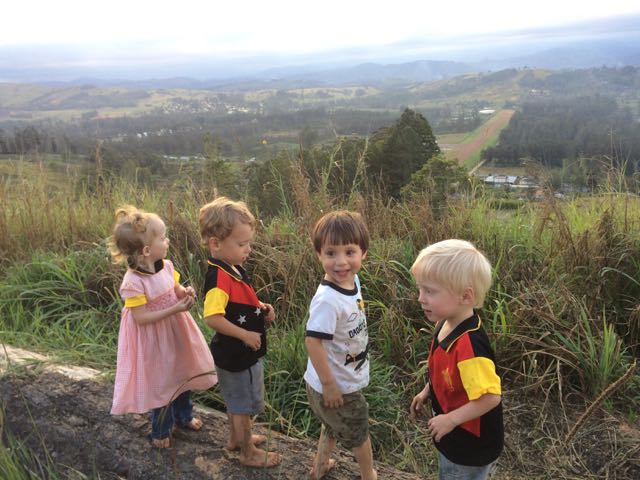 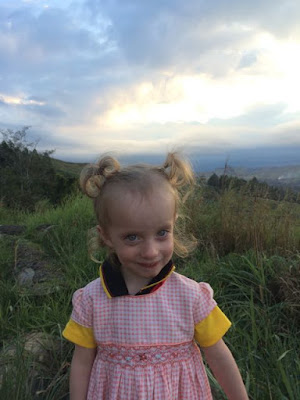 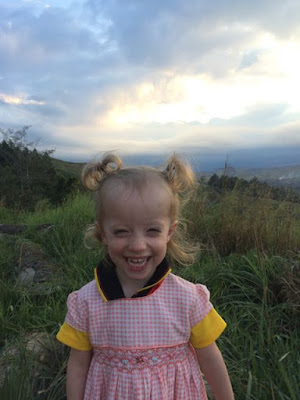 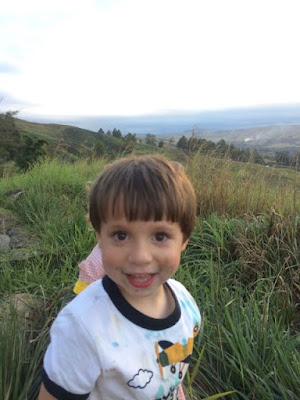 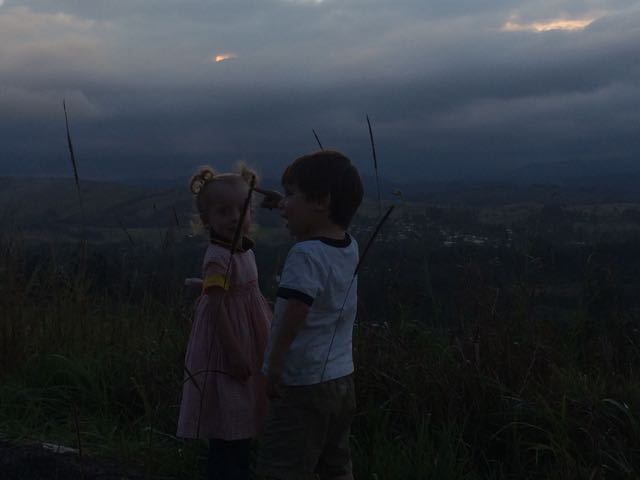 Our "big news" this week is that Marcie is [almost completely] potty-trained! Gracie and David are very interested, so they'll probably be next. Will is just interested in the prizes, and Seth is not at all interested. He just wants to be left alone to do his own thing. :)

Our other big news is that the pacifiers/binkies are GONE. Yes, it's a year late for that, but better now than even later! We had taken them away during awake hours, but it occurred to me that it was probably about time to take them away altogether, so I Googled it and found to my horror that they were supposed to be off pacifiers by two years old. They all have at least some degree of "pacifier mouth," e.g. "open bite" or overbite. (If it weren't for teeth issues I wouldn't care if they took the pacifiers with them to college, so long as they only use them in bed!) So we hid all the pacifiers and "no more!" It took three nights for the kids to get used to going to bed without their binkies, and naps are a thing of the past (sob!) because the pacifiers were so much a part of their nap-taking. But the kids have adapted to binkie-less sleep at night, and bedtime is now an hour earlier (hooray!), so that's an upside of getting rid of naps.

Will continues to amuse us with his verbalized care and concern when his siblings or others get hurt. Today in church his friend Paige was crying just because she was sad about something, and he immediately looked over and said, "Oh baby, I'm so sorry!"

If he hears a sibling crying outside he'll often go find them, saying, "Oh Bubby, I'm so sorry! Did you get hurt? Are you alright, Bubby? That's so sad!"

David always offers to kiss someone's owie. He tells us all about what's in his head, and penetration and observation is pretty amazing. He thinks through relationships and where people are, and how the mommy bird has a baby bird, and a story about that, etc. He's always seemed older and more aware than his years. It felt like he could communicate directly to our souls in the NICU, even under all the masks and wires. He gets embarrassed and distressed easily. He very much wants to be in relationship and be with us, but he doesn't reciprocate with a lot of cuddling. He wants to sit on our laps, but rarely truly "cuddles." Seth can't be still for too long, so his cuddles are usually quick and silly, playing with our faces so we look funny and then laughing at us. Marcie and Gracie love to be held by us and dance with their siblings. (All the pretty dresses they own are called their "princesses" and are very much for dancing.) Will is just plain physical, loving to hug, be hugged, wrestle and tickle. He'll start bugging his siblings just to get them going so something exciting and physical can happen. If they're in a good mood he can get something fun going pretty quickly. There is a lot of laughter around here, even though there's also not infrequent screaming due to frustration: "I don't like it!" is a common complaint.

The girls sharing the floatie ring at the pool last weekend: 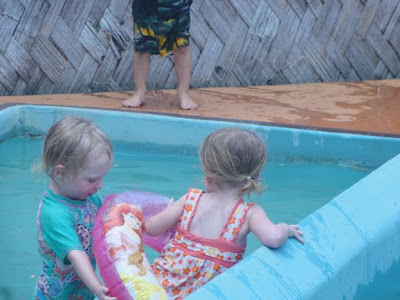 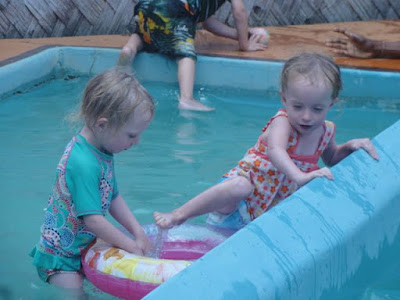 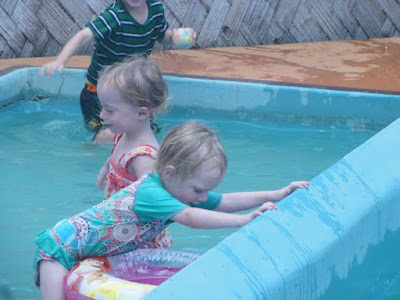 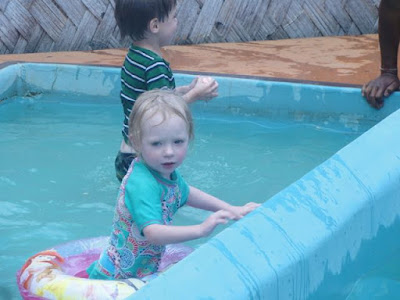 Posted by GavinCarrie at 9:58 AM 2 comments: