feeding the "koalabies" in Granite Gorge

Up on the Tablelands above Cairns, Queensland, Australia, these little guys - rock wallabies - run around "wild" but are obviously very accustomed to being fed by visitors. Feed is provided; I highly recommend this! Even Isaac loved it. The kids mixed up the words koala and wallaby to get their name for these adorable creatures: koalabees. :) 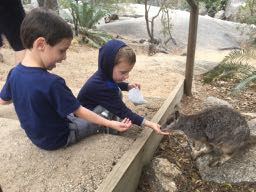 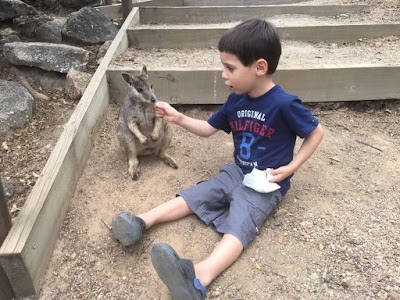 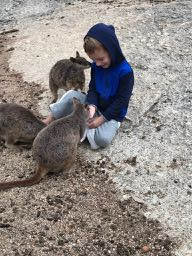 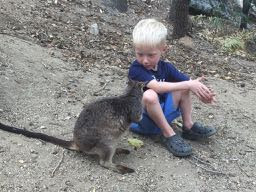 The girls had requested pink hair, so I sprayed some hairspray-like pink into their hair for the day. It made their hair feel and look disgusting, but they were happy and it washed out easily. 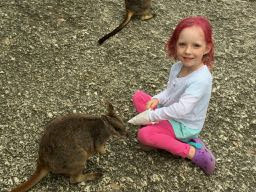 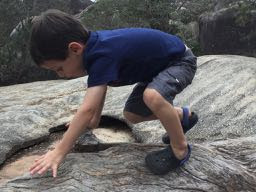 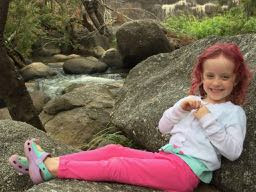 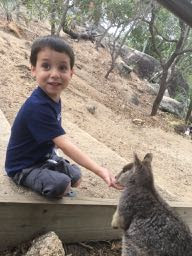 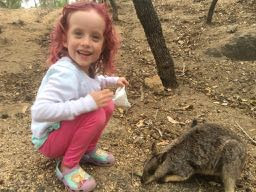 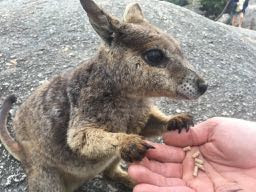 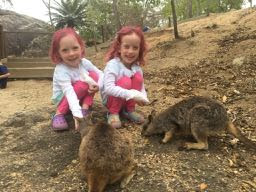 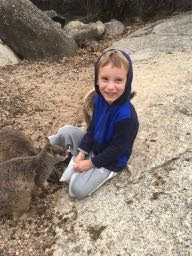 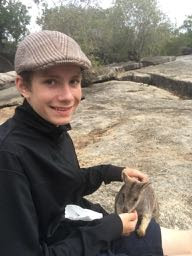 Posted by GavinCarrie at 5:55 PM No comments:

On David's plan to pacify a hypothetical ravenous wolf, thanks to an episode of Planet Earth and as a new fascination with predators of the world, wondering if they eat humans or not. This morning his question was about cheetahs; this afternoon:

"If a wolf was STARVING, it might eat a person."

"What does starving mean?”

"It means, so hungry it’s about to die."

Without missing a beat, he held out his arms as though holding an offering and earnestly suggested, "If I gave the starving wolf a dead fox to eat, maybe he wouldn’t eat me.”

I tried not to laugh aloud. "Yup, I bet he wouldn’t eat you if you gave him a dead fox to eat instead.”

Brief pause, then: "But Mommy, how could I find a dead fox?" 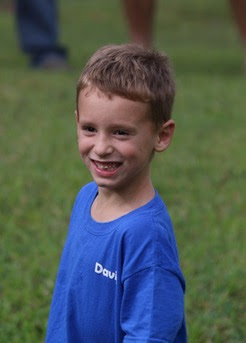 Posted by GavinCarrie at 11:08 AM No comments:

Will: "Mommy, I’m not lovely and polite, because I’m not a girl. I’m just polite."

Looking down at the monogram shirt his Grandpadad had made for him: "Mommy, this isn't my shirt! Look, it's Marcie's up letter. It's not my upside down letter!"

And wanting an airplane Seth had: “They’re only for boys that wear black hair!"

Seth got two hand-me-down trucks from a friend. He named one of them “Tuna Sandwich” and one of them “Rice.” Which happens to be his very favorite thing to eat: Tuna ["sandwich"] on rice.

Marcie: “I’m happy that we have a new dog that’s not dead."*

Posted by GavinCarrie at 10:33 PM No comments:

Watersliding at the birthday party

Thanks to Aunt/Mrs. Debbie (the kids' teacher last year and Friday-morning-hero our first year here) for being our photographer!


Posted by GavinCarrie at 1:27 AM No comments:


Posted by GavinCarrie at 2:31 AM No comments:

The five are FIVE!

One exhausted but happy family praising God for five amazing years of His faithfulness: 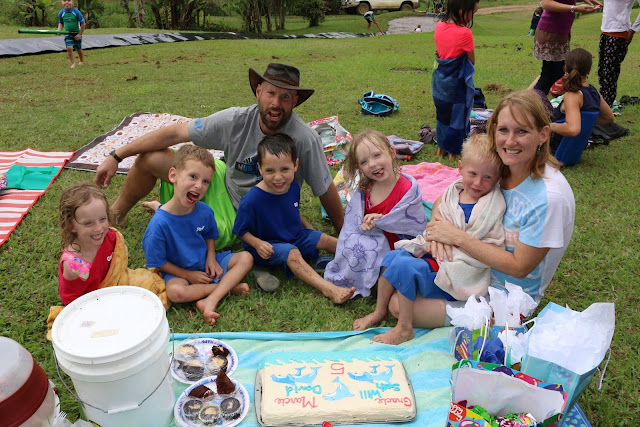 More pictures to come when we've regained our strength and energy. It's been a FULL day!

Posted by GavinCarrie at 5:33 AM No comments:

The Jones family goes Down Under

After three years in PNG we decided it was time to be brave enough to take the whole family on an airplane again. They did GREAT, for which we thank and praise God! We’re so blessed to live so close to Australia, especially the far north tip of Queensland. We're extra super blessed that my parents joined us there! We’re also much more encouraged/confident about heading back to the US next summer for a year spent visiting friends, family, churches and getting recurrency helicopter training for Gavin. The kids did such a good job traveling!

Things the quints loved about the First World (in no particular order):

Riding on airplanes (which included riding escalators - Gracie says that was her favorite thing to do in Australia):

Their grandparents (who met us at the airport in Cairns)!


POOLS (this one was heated as June/July is the Australian winter)! 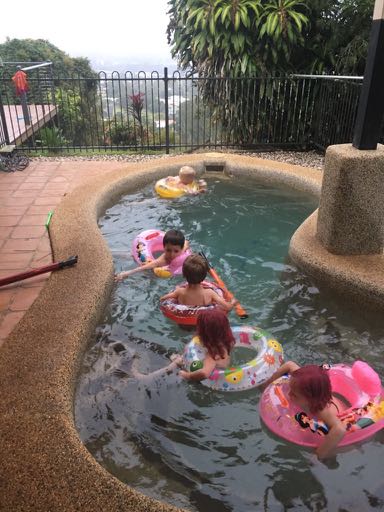 Running on bridges and raised walkways, although the kids were at least willing to stop briefly for a photo, although Seth doesn't look thrilled with the idea.

Cows - feeding them and watching them get milked


Play Places and "bubble slushies" (frozen sodas) at MACDONALD'S!! Yes, I have to put it in all caps. :) I took the quints by myself one day for lunch and had a [very busy] blast! I'm looking forward to the First World for things like this! 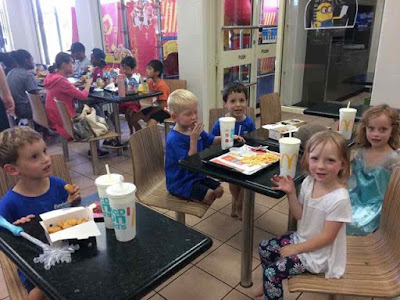 
(9) Mommy's, Grandpadad's and Grandmommy's favorite part of the Australian First World: All the fabulous COFFEE we could drink TOGETHER!
MANY more photos to follow! You'll get sick of hearing from us. :)

Posted by GavinCarrie at 6:56 PM No comments: