Keeping Up With The Joneses - November 2019

[I posted this on Saturday but it was unreadable - apologies!]

I couldn't believe it yesterday when my messages, and then a video chat with my sister and Eloise herself, revealed Eloise was discharged just  three days after surgery! As soon as she was allowed to drink and eat she completely turned the corner - and circles, literally, which is tricky for those holding the IV pole! She was off morphine, running, climbing, singing, talking, playing, doing arts and crafts, and using the bathroom as though everything was normal. She had been so miserably thirsty while they waited for her digestive system to start working again. That was by far the hardest thing for Katie (my sister) and Calvin, her husband.

My parents went over to the house last night to see how she was settling in. My mom says she was her normal, happy, bouncy, chatty little self! Incredible. She doesn't even appear to need physical therapy for the large amount of back muscle that was removed . It wasn't functional anyway, apparently! And she's SO active, it hasn't hindered her a bit!
Thanks for praying for continued rapid healing and for the remainder of this cancer to be dealt with effectively! We won't know the plan until all the histology/pathology is complete in about two weeks. Among the large amount of muscle and tumor was removed, there was an unexpected area of the tumor that doesn't look like the rest that was biopsied - so we're praying that's less aggressive rather than more!

All my Facebook posts about her are public, too.
Posted by GavinCarrie at 4:02 PM No comments:

The 3.5 hour surgery went well, although the tumor was quite stuck to the bones protruding from the spinal column. He said there were no major nerves involved and it came away from the organs very well. It’s grown into the spinal column and surrounds the actual cord, and he wasn’t willing to mess with that, so that remains for now, and we PRAY it's all dead tumor.

Elo has a four-inch incision under her ribs. They didn’t have to cut through the skin on her back at all to remove the tumor-invaded muscle, thankfully. She wakes up periodically crying, so please pray for comfort for everyone, especially her of course! She will be in ICU until she’s off the IV morphine, I believe, and can start taking liquid meds by mouth. A huge praise is she was able to come off the ventilator immediately after surgery.

From Katie just now: We are back with Eloise in ICU for tonight. She is so spirited, even when sedated. ☺️ Thank you for your support and encouragement. May there be healing and minimal pain. The surgeon said he got all the tumor he could see- up to the vertebrae bones. The rest remains in her spine but appears to be inactive. A full pathological report will be completed in two weeks and will determine the next step. Love you all, thank you.

Posted by GavinCarrie at 10:13 PM No comments:

Katie just called from the car. They're on their way. Eloise talked to me for a little bit but was too sleepy to talk much. She told me she was on her way to the doctor and had packed food in her suitcase. :)

Please pray that the surgeon can get everything he needs to out of our little girl, and that the vital structures (nerves, spinal cord, blood vessels, organs, etc.) would be completely protected. I'm praying this tumor would be remarkably, miraculously, easily separated from her precious insides. And I'm praying for a merciful healing time afterwards. (I had an ectopic rupture and can testify that having one's innards rearranged is a painful thing. I recovered incredibly quickly, though, and pray the same for Elo!) I'm also praying for comfort and peace and unity in the necessary suffering for Katie and Calvin and rest of the family ('cause let's face it, there will be suffering as they watch their little girl go through this - we all wish we could take her place!). And last but never least, for big brother Foster who will be doing life differently and without his baby sister. This is a boy who thrives on routine and normalcy, so it could be hard. Thanks for praying as the Lord leads you! I'll post again when I get an update.

Leaving you with a picture of the two kids on a bike ride a couple days ago with "Grumpadad" as they call him: 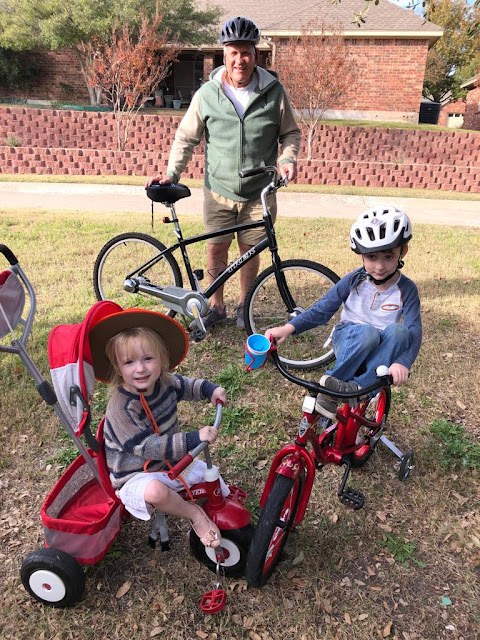 Surgery postponed until next Tuesday, Nov. 12

Elo's cough made surgery too risky today, due to swollen vocal cords and needing to be intubated for breathing, not to mention having a virus. Please pray she gets over this quickly and doesn't get anything else. She'll be basically isolated for the next week - hard for a tiny, active, social little girl!


Posted by GavinCarrie at 8:43 PM No comments:

My niece is supposed to go into surgery in just 4.5 hours, if her cough that suddenly showed up yesterday doesn't necessitate postponement. This tumor looks so daunting on the MRI. PLEASE PRAY for the surgeon's and assistants' hands and wisdom and guidance! Please also pray that Eloise will have minimal pain or discomfort and no emotional/mental trauma from the experience. It will be a fairly extensive surgery, moving organs aside and trying to avoid any nerves or vital structures, and will require a long recovery - 7-12 days in the hospital as well as ongoing physical therapy to teach her to compensate for the back muscle that will have to be cut out (because it's intertwined with the tumor). And of course, please also pray for peace for Katie and Calvin and the grandparents and all the other people who love this little winsome munchkin and would change places with her in a heartbeat. I'm blessed in that I get to sleep through the hours of waiting. (There are occasional bonuses to being on the opposite side of the world! Otherwise, it's just HARD at a time like this.) I'll try to remember to update ASAP tomorrow.

This photo, below, was taken my last day in Dallas. I flew out that afternoon (*sniff*). I'm holding Elo, and my other niece is on my sister-in-law's lap. It was so special to see the little girls together - they adore each other and are only a few weeks apart in age. And it was delightful to get to be with my sweet, fun sister-in-law, as well as my parents and Katie. (I know North Texas area ladies will recognize The Dove's Nest in Waxahachie!)

Meanwhile, back in PNG:

Isaac's new haircut . . . scary! I'm usually the one who cuts hair - using scissors - but Gavin and Isaac got too desperate to wait for my return and buzzed it instead. :) 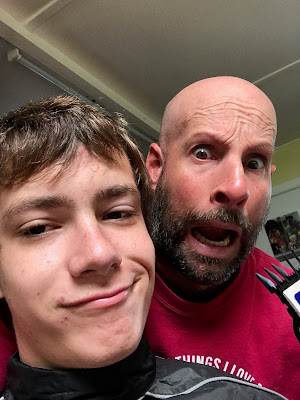 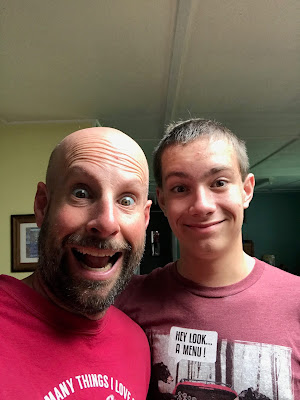 Gavin tried to get the kids into good working order before I returned: 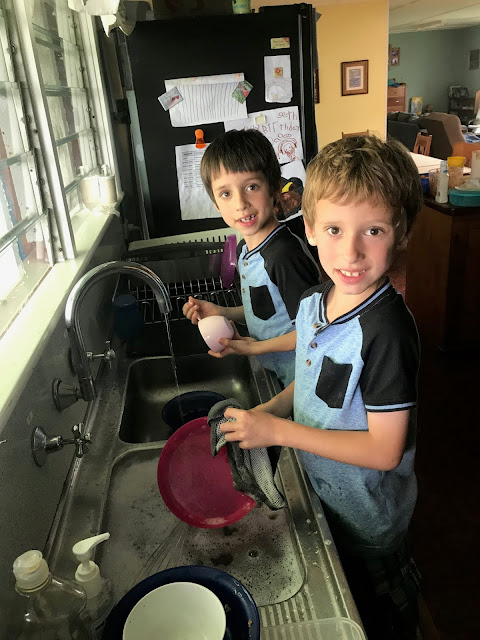 Posted by GavinCarrie at 6:09 AM No comments: