Posted by GavinCarrie at 8:19 AM 2 comments:


Posted by GavinCarrie at 7:25 AM No comments:

Miscellaneous pictures from the past couple of weeks


Posted by GavinCarrie at 7:22 AM No comments:

I think missionaries always struggle with knowing how honest to be, how much of the story to tell. Since I figure honesty in this case will almost certainly result in more prayer support, I'm choosing to be pretty transparent.

Tonight was a HARD night. I definitely reached the end of my weak self and ran out of the house in tears because I just couldn't take the stress of crying kids anymore. Marcie and David were pretty much clinging and crying all day (at least while at home). David woke up way too early for some reason, and then Gracie woke them both up from their nap WAY too early, which threw them off the remainder of the day and made them really needy. However, the other toddlers still have their little needs to be met, and I can't stand to deny them. It's not their fault they are quints! They need love and attention every bit as much as a single child would. Marcie, Gracie, Seth and Will all took tumbles today that resulted in hurt knees (and tummies in the case of M and S - they slid out from under our fence on their stomachs. Gotta patch that hole!). David has been really insecure, perhaps because we've been organizing the items from our shipment, storing them in empty suitcases (so it looks like we're packing to move again), and tearing out a couple of unnecessary walls to open up the house a bit more. Poor little dude, he hates loud noises and chaos. He's definitely the most high-strung and situationally aware of the quints and always has been.

On the whole, I would say it's much easier to raise the quints here than in the U.S. However, the lack of breaks from the stress is definitely problematic. In the US we had the kind of backup family and babysitting support where we could leave for a night or two whenever needed. Here it's a lot more difficult to coordinate and plan getaways even when we can travel the roads (which we can't right now due to some security issues completely unrelated to us) and I feel a lot more reluctant to impose on our friends who are already very busy raising their own kids and/or working outside the home, plus doing "life" from scratch - hanging out their laundry, planning and cooking meals, keeping up with the constant dirt, and trying to keep in touch with all those back home whose giving and praying allows us all to be here.

Anyway, there is nowhere we can go just now in the country unless we fly there, and obviously that's not a great idea for financial reasons. We can't even get out to our local town 15 minutes away, which, while dirty and very much not First World shopping, at least offers a break from our one-mile-square area. So right now I'm feeling a bit more trapped than normal. . . and that trapped feeling tempts me to feel like a failure as a missionary mom, wife, woman. However, I realize no other missionary in a developing country has two-year-old quintuplets. No one experiences the mission field like I do, which honestly makes me feel alone sometimes. Moms with lots of young kids can definitely relate a TON, but there is a key difference (besides the fact that all my little kids are exactly the same age): I have to use Papua New Guineans in our home a lot more than any other moms I know. This very huge blessing of being able to hire the help we need also increases our cultural stress and greatly exacerbates our lack of privacy. Privacy is not the value to Papua New Guineans anyway that it is to us. (While I was in the shower someone came and asked about sheets for the babies' beds! Really?!) Property is not understood in the same way either, which practically addressed means I've had to start locking up food and other silly supplies that disappear otherwise. There is a tendency to just help themselves, which would be great if it weren't 3 times as expensive to buy replacements here as it is in the US! (Funny aside: One item that I've had to start locking up is my treasured Freezer Ziploc bags! They are very appreciated by Papua New Guineans too. The stash my mom sent after we first arrived was gone within days.) These things disappearing isn't considered stealing. I marked out that food for their use, so they used it! (I of course meant one package/can per person per day, not "take whatever you think your family would enjoy tonight around their fire" - although I'd love to be able to do that!). The Papua New Guinean sense of property vs. communality was illustrated to me the other day when I made a huge cake for our little friend and babysitter Dilu. She cut the cake into lots and lots of little pieces and shared it with her entire neighborhood! Isaac's friend Jason did the same thing with his birthday cake. These kids don't even have the sense that their piece should be bigger than others'. It's really sweet and a lot more Biblical than our way of hording birthday cake in our family! :) But it's really not Western thinking, and that's where I get into trouble culturally and financially if I don't put out exactly what I expect our helpers to eat each day. Mind you, these are PRECIOUS people I deeply love. But that doesn't mean there isn't some unique cultural stress added to the already higher baseline stress of five opinionated two-year-olds cohabiting the same house and environment (no wonder Marcie and Seth went under the fence today!! I was tempted to join them . . . ). ;) 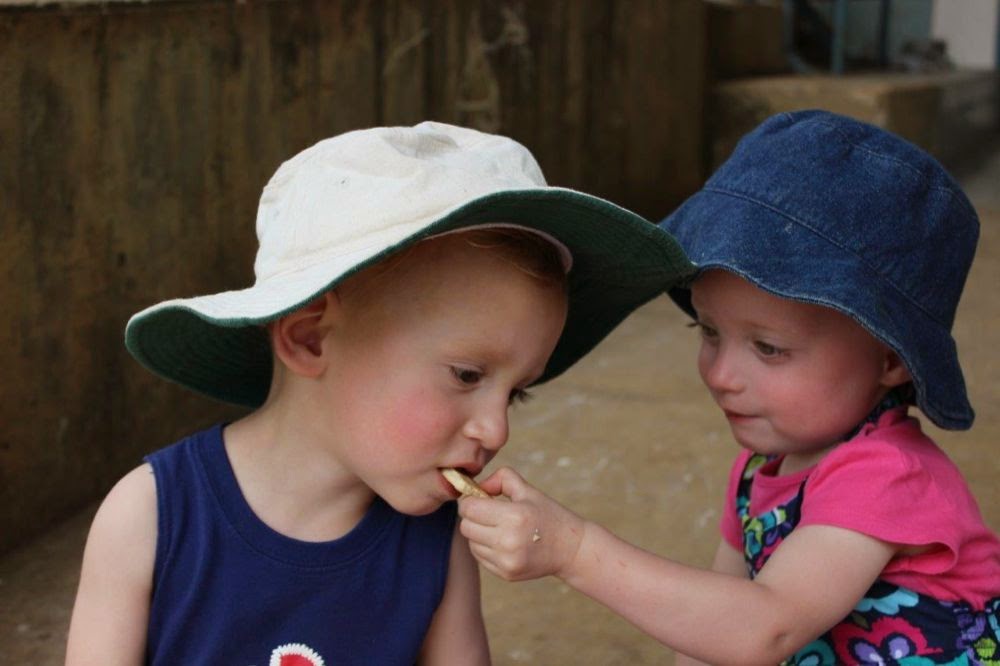 In cute quint news, Marcie came up to me yesterday and said with a sigh, "Mommy, Gracie sleeping." (Exact pronunciation: "Gay-see seeping"). Sure enough, Gracie was lying on the floor on her blanket.

Both David and Gracie went pee-pee in the potty last night!

All the babies ask to "hold you!" when they want us to pick them up. Seth's is the most affecting. I can't resist it.

David and Will love any movie about flying, even documentaries made for grownups.

Marcie and Gracie and Seth LOVE, LOVE, LOVE books. Will mostly loves his flying (airplane) book. David likes books but prefers to be read to while he's accomplishing something in the background.

David understood Gavin saying that Velvet (our dog) needed to be let out the other day, so he walked over to the porch gate (which is supposed to be baby-proof), reached around to access the outside latch, let her out, then closed the gate behind her again.

Did I already tell you this one?: David noticed one of Gracie's pink Crocs had come off in her crib, so he said, "Uh-oh, shoe! More pretty shoe?" (We needed to find her other "pretty" pink shoe.)

Gracie is replacing a lot of her "babble language" with real words now. She's talking a lot!

The kids love their hug-fests, when they drop everything, laugh and take turns hugging each other and Gavin and me. Will and David still love to wrestle, and sometimes Marcie and Seth enjoy it too - depending on their mood. It's very cute!

So you see, I really do love and adore and enjoy these darling children, including their big, handsome, funny, affectionate, fun brother!

Posted by GavinCarrie at 7:18 AM 9 comments:

Gavin had to fly all day today (a good thing for him), so our friends kindly had us over for a pancake breakfast and "swim" party. Thanks, Careys! 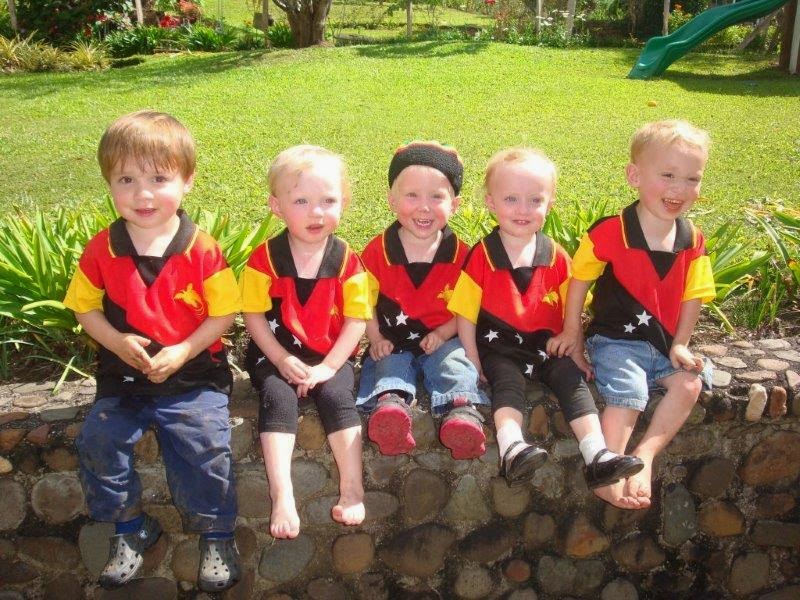 Posted by GavinCarrie at 7:47 AM 2 comments:

Ring Around the Rosy 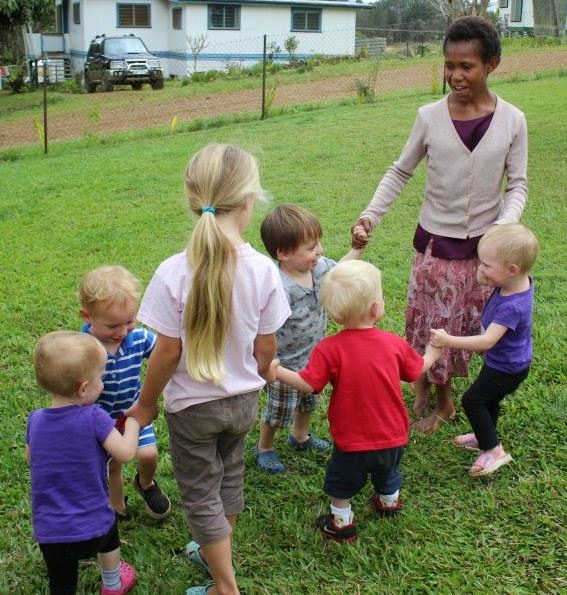 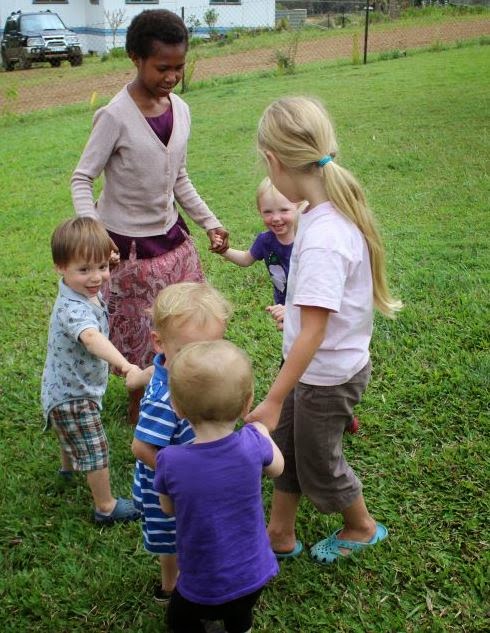 Posted by GavinCarrie at 7:43 AM No comments:

Two+ weeks worth of pictures (round 1) 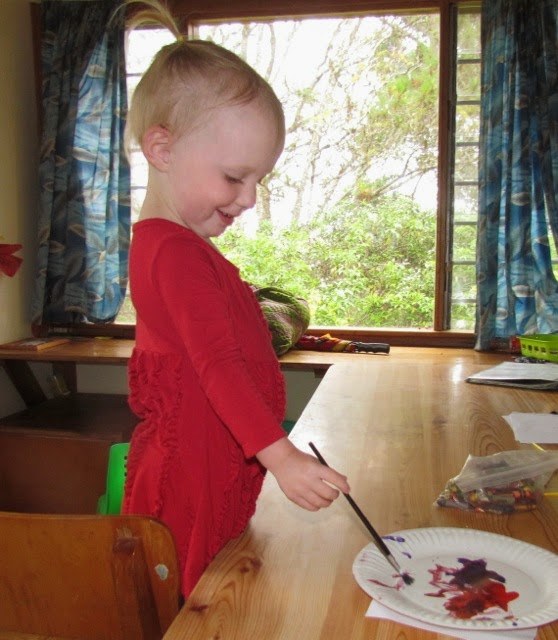 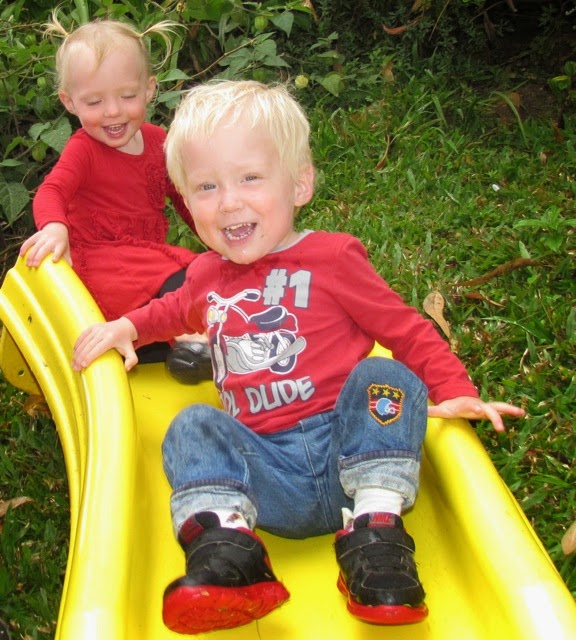 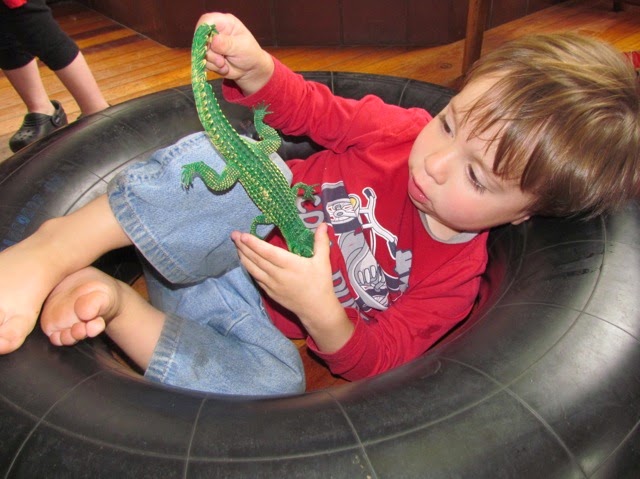 Posted by GavinCarrie at 7:37 AM No comments: